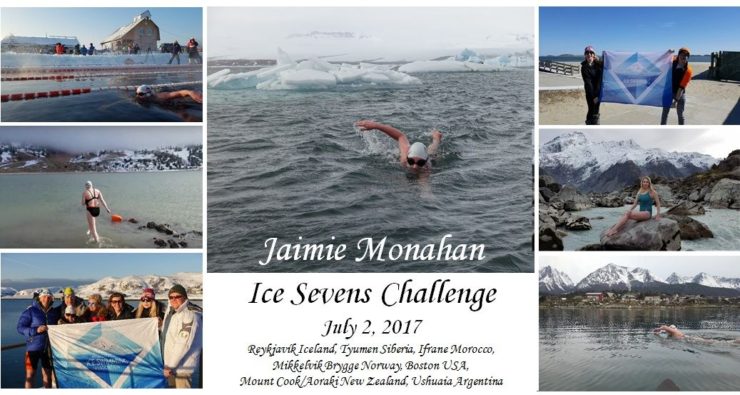 First Ice Sevens Challenge Ends at the End of the World

On July 2nd, 2017 Jaimie Monahan, an American ultramarathon and ice swimmer from New York City, became the first person in the world to complete the Ice Sevens Challenge which is governed by the International Ice Swimming Association (IISA) rules, this unique challenge was based on the concept of the Seven Summits and Oceans Seven.

To achieve the Ice Sevens, Jaimie completed seven ice miles under standard ice swimming rules ratified by the IISA, in just over a year.  The rules of the challenge specified that aspirants complete ice miles swum below 5ºC (41ºF) in any location in Europe, Oceana, Asia (including Russia), North America, South America, as well as a Polar ice mile at or below 60º south latitude or above 70º north latitude.  As an additional challenge, one of the seven ice miles must be a documented Zero Ice Mile (defined as a solo mile swim performed at or below 1ºC.)

This quest took Jaimie and her team around the globe to some of the world’s most stunning and extreme landscapes.  This journey started in 2016 in beautiful Iceland, continued to a frozen lake in Siberia where she became the world’s first female Ice Zero swimmer under IISA during the Tyumen Open Cup.  In 2017, she faced altitude along with cold in Morocco’s scenic Atlas Mountains, then continued to Norway above the Arctic Circle for a polar ice mile on Ger Kennedy’s Norway expedition.

After the Arctic Circle, she returned to home waters to complete a fifth ice mile in Boston, Massachusetts with the IISA-USA.  For ice mile number six she dodged icebergs in New Zealand’s beautiful Tasman Glacier Lake, and for the seventh and final mile she enjoyed perfect conditions amidst snow-capped mountains in Argentine Patagonia in the Beagle Channel’s storied waters.

Well Done Jaimie, an ICE Mile is considered as one of the most extreme and challenging swimming challenge. You are now officially an IC E 7s – Ice Swimmer.